Engines to the Rescue (US DVD)

Engines to the Rescue

Trouble on the Tracks

Engines to the Rescue is a Walmart exclusive US DVD containing five episodes from the seventeenth series. It was combined with the US release of Tale of the Brave.

Fizzling fireboxes...there's mayhem on the main line and it's up to Thomas and his friends to race to the rescue! Flynn finds out you can never have too many fire engines, as Bill and Ben play tricks on speedy Connor. James' spooky story has Stephen and Percy rattling their rails, while Thomas has a hard time believing Charlie's jumbo tale. Bad coal won't keep Henry and Hiro from puffing along to save the day. Full steam ahead for fun with these engine heroes! 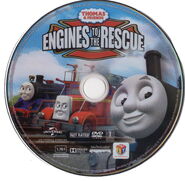 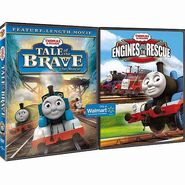 Double pack with Tale of the Brave

DVD with Tale of the Brave Digital copy

Setup
*Disclosure: Some of the links above are affiliate links, meaning, at no additional cost to you, Fandom will earn a commission if you click through and make a purchase. Community content is available under CC-BY-SA unless otherwise noted.
Advertisement