Everyone's Friend is a magazine story.

Edward steams into the Main Station where he finds Gordon looking grumpier than ever. He explains that he is not very liked and Edward tells him that he should try being nice for a change. Gordon decides to put this to the test and soon meets Thomas. He asks Thomas how he is feeling. This surprises Thomas so much that he runs into some buffers and sends the eggs in his truck flying over the Fat Controller. Later, Gordon toots "hello" to Diesel, who is so surprised that he comes off the rails and lands in a lake. Next, he meets Percy who was so surprised at Gordon's cheery greeting that he jerks his truck of toys; sending all the Jack-in-the-Boxes bouncing.

Upset, Gordon chuffs back to his shed. He decides that everyone expects him to be grumpy. Then, Gordon is surrounded by a crowd of people cheering. They had seen all the funny things that had happened whilst Gordon was around. Gordon is surprised that he is everyone's friend after all. 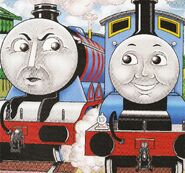 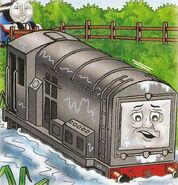 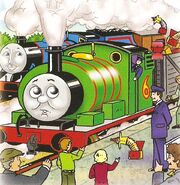 Gordon and Percy
Add a photo to this gallery
Retrieved from "https://ttte.fandom.com/wiki/Everyone%27s_Friend?oldid=1688502"
*Disclosure: Some of the links above are affiliate links, meaning, at no additional cost to you, Fandom will earn a commission if you click through and make a purchase. Community content is available under CC-BY-SA unless otherwise noted.