“You must slow down!"
"No time!”
―The driver to Gordon

Express Delivery! is a magazine story.

Gordon is standing in the station being oiled just before taking the express. He overhears a man talking to the Fat Controller on the platform. The man says that his new Express Service will go all over Sodor. Gordon is concerned - he is the best at pulling the express. Gordon decides to make today's run in record time to show how irreplaceable he is.

A few moments later, Gordon's passengers are on board and Gordon sidles out of the main station. It is not long before Gordon is whizzing along at top speed. He is going so fast he almost forgets to stop at one of the stations. A few passengers hurry down the platform and board the last coach. Gordon's driver insists that Gordon must slow down, but the big engine ignores him. Gordon's coaches rock so much that the passengers are bounced about in their seats. Luggage falls from the luggage racks above and the everyone becomes very cross.

At the end of the line, Gordon is approached by the Fat Controller who enquirers as to why he has had so many complaints from angry passengers. Gordon tells the Fat Controller that he has made record time and that he should be chosen to pull the new Express Service. Then the chef emerges from the dining car and says that the oven has broken during all the rocking and now the passengers will get no food. The Fat Controller hurries away to make a phone call.

A few moments later, Gordon sees a man arrive in a van. On the side of the van are the words "SIMON'S EXPRESS SANDWICH SERVICE". Gordon gasps as he realises that this is the new Express Service he had overheard being mentioned earlier. Gordon is pleased that the passengers will have sandwiches to eat and even more pleased that he can now slow down. 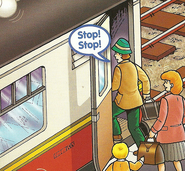 Add a photo to this gallery
Retrieved from "https://ttte.fandom.com/wiki/Express_Delivery!?oldid=1347062"
Community content is available under CC-BY-SA unless otherwise noted.