“I'm very glad Harold's an eye-in-the-sky!"
"These balloons look like I'm having a party in the sky!”
―Percy and Harold

Eye-in-the-Sky is a magazine story.

Thick snow has turned the island into a winter wonderland. While working on Thomas' Branch Line, Percy passes Lorry 1 and Lorry 2 who are gritting the roads. Soon, Percy reaches an icy section on the track and his driver has to put some sand down. Harold whirls overhead and says that being airborne is the easiest way to get about. He explains that it is his job to report by radio which roads are cut off so that the lorries can clear them. Harold cannot imagine a more important job than being an eye-in-the-sky. Percy says he is just as busy taking lots of party goods to help everyone enjoy themselves at Christmas time. Harold laughs cheekily and he flies away. His blades leave Percy spluttering in a cold cloud of swirling snow.

Percy is still fuming while his truck is being loaded with party goods in a factory siding. It has started to snow heavily again as Percy starts off on his return journey. Thick snow blows into Percy's eyes until he can barely see where he is going. His driver is worried and decides to find shelter until the blizzard ends.

Percy turns onto an old, disused loop-line and rolls inside a nearby tunnel, but the snowstorm gets worse. Suddenly, there is a snow-slide and the tunnel is blocked at both ends. Percy is worried; they could be stuck for days. His driver spots an air shaft in the tunnel roof, but it is much too high and narrow for him to climb. Then, Percy remembers that there are boxes of balloons among the party supplies; they can be used to send out a signal. Percy's crew blow up some balloons and Percy puffs to help blow them up the air shaft and out into the sky.

By now it has stopped snowing and Harold is sent out on patrol again. He cannot believe his eyes when he sees brightly-coloured balloons rising from the snow-covered railway tunnel. Harold radios the Fat Controller and Percy is rescued. Now, Percy is relieved that Harold is an eye-in-the-sky, but the helicopter thinks the balloons look like he is having a party in the sky. 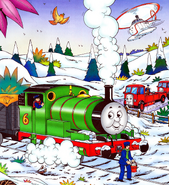 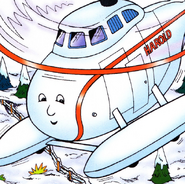 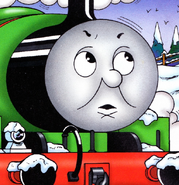 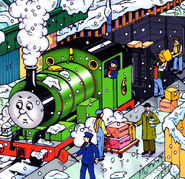 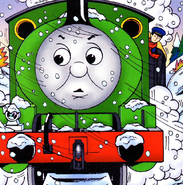 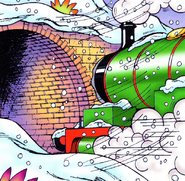 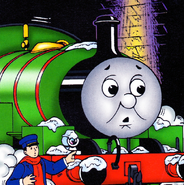 Add a photo to this gallery
Retrieved from "https://ttte.fandom.com/wiki/Eye-in-the-Sky?oldid=1770402"
*Disclosure: Some of the links above are affiliate links, meaning, at no additional cost to you, Fandom will earn a commission if you click through and make a purchase. Community content is available under CC-BY-SA unless otherwise noted.