On their way to Ballahoo, James tells Edward that he wants a race. As James races on, he ignores a cow looking for her calf. Edward notices this and stops to help the calf get to his mother. Then James passes Percy who is stuck on the tracks due to a fallen branch. James ignores him and chuffs on, while Edward helps Percy. James passes Bertie who has run out of petrol. James ignores him as well and chuffs on, while Edward takes Bertie's passengers to the nearest station. While James stops and admires his reflection on the water, Edward passes by and wins the race. 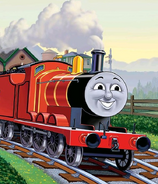 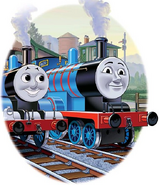 James and Edward at Ballahoo
Add a photo to this gallery
Retrieved from "https://ttte.fandom.com/wiki/Fast_Train,_Slow_Train?oldid=1757174"
*Disclosure: Some of the links above are affiliate links, meaning, at no additional cost to you, Fandom will earn a commission if you click through and make a purchase. Community content is available under CC-BY-SA unless otherwise noted.