“Pah! You and your dirty, smoky funnel! I have to hurry off to the Docks soon. I won't run well if you blow smoke all over me. It makes me cough and gets in my eyes!"
"Sorry!”
―Diesel being rude to Fergus

Fast and First!, rereleased in 2011 as Slowcoach Diesel, is a magazine story.

Diesel is being rude to the steamies. He tells Fergus that he is fast and clean and makes no fuss. Fergus wants to race Diesel, but he thinks it is pointless. Gordon has an idea which he whispers to Fergus whilst Diesel is filling up with Diesel oil. They put their plan into action with some help from Rocky. When Diesel rolls into the docks, he is surprised to see slow and steady Fergus already there. Unbeknownst to Diesel, Gordon had asked Rocky to lift Fergus onto a flatbed. Then Gordon hastily pushed Fergus to the docks. 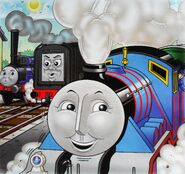 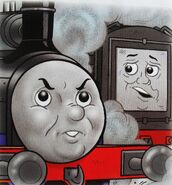 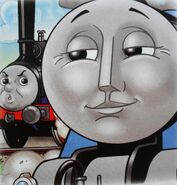 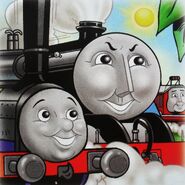 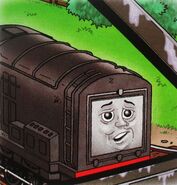 Add a photo to this gallery
Retrieved from "https://ttte.fandom.com/wiki/Fast_and_First!?oldid=1689025"
*Disclosure: Some of the links above are affiliate links, meaning, at no additional cost to you, Fandom will earn a commission if you click through and make a purchase. Community content is available under CC-BY-SA unless otherwise noted.