Fernando is a diesel shunter who works in Brazil.

Fernando was first seen at Guanabara Bay when Sir Topham Hatt was looking for Thomas. He told him that he saw the tank engine taking coffee to San Francisco. He then proceeded to dance along to the music after Topham was dragged away by a group of people taking part in the carnival.

Fernando was seen pulling a train through the docks as Thomas, Raul, Gabriela and Cassia were playing with a beach ball. Raul proceeded to send the ball flying into one of his trucks.

Thomas encountered Fernando when he was delivering machine parts. The diesel complimented Thomas on the sounds that his moving parts were making, saying that he had a good rhythm going and suggested that he go to the carnival.

Fernando is very polite and tries to be helpful to anyone he meets. He seems to have a habit of pointing out when someone repeats him, and will say "That's what I just said!" whenever they do so.

Fernando is based on a BR Class 08. Diesel, 'Arry, Bert, Splatter, Dodge, Paxton, Sidney, The Mainland Diesels, the orange and blue shunters and the Diesel Shunter are also based off of this engine.

Fernando's basis
Add a photo to this gallery

Fernando is painted aqua and light grey with aqua straps across the top of his bonnet. He has red wheels, a red headlamp and has black and yellow hazard stripes on his front.

Fernando with Thomas in the twenty-third series

Fernando with Thomas, Raul and Gabriela

Fernando with Thomas, Gabriela and Cassia in the twenty-fourth series

Fernando with Marcia and Marcio
Add a photo to this gallery 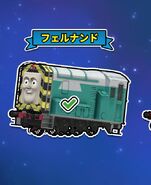 Fernando in Thomas and Friends: Adventures!
Add a photo to this gallery
Brazil
International Characters
* RWS only | ** T&F only | ✦ Changed location
Retrieved from "https://ttte.fandom.com/wiki/Fernando?oldid=1806327"
*Disclosure: Some of the links above are affiliate links, meaning, at no additional cost to you, Fandom will earn a commission if you click through and make a purchase. Community content is available under CC-BY-SA unless otherwise noted.