“This Layout represents the main terminus of Thomas' Branch Line in the Island of Sodor. The line behind the station goes to locomotive and carriage sheds, stone dressing sheds and a stretch of line laid tramway fashion along the roadside for 5 1/2 miles up to the Anopha Quarry. The area shown covers the station only. Beyond the tunnel mouth are Elsbridge, Knapford, Tidmouth and other places in the outside World”
―Wilbert Awdry 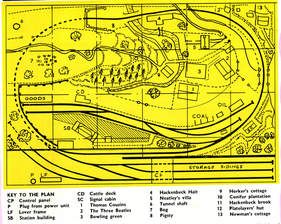 The Ffarquhar Branch layout has it's origins in 1955, when Wilbert was asked to build a simple model railway to be shown in the hobbies section at the 1956 Wisbech Trades Fair. Wilbert obliged and begun work, choosing to build something transportable - this would be a 6' x 4' Layout that hinged at the centre to fold up into a 6' x 2' x 18" box that fit into the boot of his car. The track plan was a continuous circuit with two branches. One branch was visible to the public as the station and sidings, while the other was hidden behind the backscene as a fiddle yard along with the rest of the continuous circuit. After a successful week at Wisbech, the layout was in high demand locally at Fetes, Trade fairs and hobby shows! The layout was always operated in a proper railway like manner, with a spoken commentary enabling the viewers to know what was going on and why. In December 1959 an article entitled "The Ffarquhar Branch by the Rev W, Awdry" was published in Railway Modeller, Volume 10 Issue No.110. Wilbert went over the history of the branch line, how he built the layout and the detail in the scenery among other things.

The Mk1 Layout was originally run by Thomas, Percy and Toby - with Duck being brought along to exhibitions as a spare engine. At The Model Railway Club's 1963 Exhibition there was a newcomer to the layout, Daisy made her public debut in model form for the first time. At the 1964 exhibition, Stepney made his debut on the special observation saloon train and finally, at the 1965 exhibition, Mavis made her debut on the layout, seven years before she would star in a Railway Series book.

The Mk1 Layout ran all the way until 1967; the decision to rebuild the layout was made up of two main factors - Wilbert and his family had moved to Stroud in 1965, and the large layout did not make the best use of space in his new Railway Room. Secondly, the car that the layout was designed to fit in for transportation had been sold. Wilbert covers his plans for rebuilding Ffarquhar in the January 1968 edition of Railway Modeller, alongside plans for a Skarloey Railway OO9 Layout. Neither of these plans came to fruition, instead Ffarquhar was rebuilt in a similar fashion - but the proposed scenic section to Elsbridge was dropped in favour of a much simpler corner piece depicting the Hackenbeck river and tunnel. The OO9 Skarloey Railway layout was never built; in its place, however, was Ulfstead Road, a Mid-Sodor Railway layout in OO9 that would go on to inspire a Railway Series book. Parts of Ffarquhar Mk1 made their way onto Ulfstead Road - various bits of foliage, trees and fencing were used alongside Hackenbeck Halt being rebranded and reused as Cas-ny-Hawin Halt

Ffarquhar Mk2 was first shown in 1972 at the Bristol Easter Week Exhibition in it's "Short" format, like how it is currently displayed in the Narrow Gauge Railway Museum at the Talyllyn Railway. The "L" shaped extension was completed in time for The Model Railway Club's Central Hall 1973 Exhibition, whereas the extension was only displayed at exhibitions that were to last over three days. Not much changed in regards to the rolling stock operating on the layout, except that Oliver and James Mk2 had been built and used on the saloon specials alongside Stepney and the LNWR Bloomer.

With the sad passing of Wilbert Awdry in 1997, Ffarquhar Branch Mk2 and the majority of Wilbert's model railway collection were left to the Talyllyn Railway Preservation Society. The Layout was restored to operation in 2001 by the TRPS and the Barrow Model Railway Club, since then it has been to a handful of exhibitions in the UK and Ireland.

Ffarquhar Branch Mk2 now resides within the Narrow Gauge Railway Museum at Tywyn Wharf on the Talyllyn Railway, as part of the Awdry Study display. The layout is still operational and goes out to the occasional exhibition.

The Mk1 layout's operation was originally shown in either one long 40 minute sequence or two 20 minute sequences, covering a morning's work (7:25am - 1:05pm) at Ffarquhar and Hackenbeck. By 1965, a third sequence was added - the operation now covered 7am - 11pm.

The Mk2 layout's operation is shown in three sequences, covering a whole day's timetable at Ffarquhar (6.45am - 11:04pm). Each sequence is about 20 minutes in length.

Both iterations of the layout use the Spratt and Winkle automatic coupling system on its rolling stock.

The Rev W. Awdry with his models of Thomas, Annie and Clarabel on the Mk1 layout 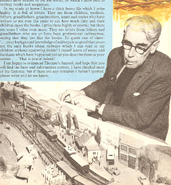 The Rev W. Awdry running Toby on the layout

The Rev W. Awdry with Thomas Mk2 and Toby on the Mk2 layout 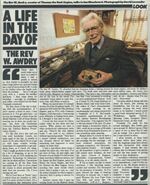 The Rev W. Awdry in front of his layout

The layout in The Thomas the Tank Engine Man documentary

Henry on the Mk2 layout

All of Awdry's Thomas models lined up on the layout

The Observation Saloon Coaches in the goods siding

Ffarquhar Mk1 in The Great Little Railway Show
North Western Railway
* RWS only | ** T&F only | --- Dropped
Ffarquhar Branch Line
* RWS only | ** T&F only
Deutsch Español עברית Polski Русский 中文
*Disclosure: Some of the links above are affiliate links, meaning, at no additional cost to you, Fandom will earn a commission if you click through and make a purchase. Community content is available under CC-BY-SA unless otherwise noted.
Advertisement