Fire Engine Flynn is a book in the Thomas Story Time series illustrated using photographs from the CGI television series.

At the Sodor Search and Rescue Centre, Diesel accuses Flynn of not being busy. Just then, the rescue bell rings out. Rocky tells Flynn that a blue engine is in danger, but Flynn races away before hearing the rest of the message. Down the line, he meets Edward. Believing that he is the engine in trouble, Flynn sprays water all over Edward and his driver. Flynn, realising that Edward is not the engine in danger, feels silly and races away.

At Maron, Flynn meets Gordon who is picking up Sir Topham and Lady Hatt. Flynn sprays the big, blue engine with water, soaking the Fat Controller in the process. Gordon tells Flynn that he is not on fire, leaving the fire engine feeling silly once again. Flynn sets off to the real endangered blue engine, now wishing he had waited to hear the rest of the message.

At the Sodor Dieselworks, Flynn finds Thomas who has a fire in his firebox. Flynn aims his water cannons, but no water comes out. He had used it all. Flynn is sorry, but knows how to put the problem right. He asks the Diesels to save Thomas. The Diesels' drivers hastily pour water into Thomas' flaming firebox.

Flynn trundled back to the Search and Rescue Centre, where he filled up with water. Then the rescue bell rings out again. This time, Flynn waits to hear the whole message before rushing off to the rescue. 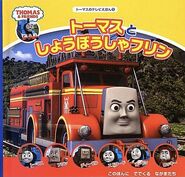 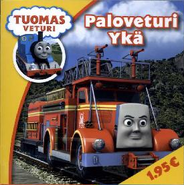 Retrieved from "https://ttte.fandom.com/wiki/Fire_Engine_Flynn?oldid=1688888"
*Disclosure: Some of the links above are affiliate links, meaning, at no additional cost to you, Fandom will earn a commission if you click through and make a purchase. Community content is available under CC-BY-SA unless otherwise noted.