Frank is a grumpy but kind diesel who works on the Arlesdale Railway.

Frank was built at Arlesburgh Works circa 1967 out of bits and pieces from several other engines. He is powered by a Perkins diesel engine, and was named after its creator. Frank is a shunter who is used for maintenance work and empty carriage workings across the Arlesdale Railway.

When The Railway Series book, Small Railway Engines was first published, Frank became infuriated when he found out that he had been left out due to the Thin Clergyman not being aware of his presence. He then refused to come out of the shed the next morning, but when he did, he only resulted in running into the back of the shed, cracking a shed support. He then felt ashamed of what he had done, but later redeemed himself by rescuing Rex when his steam pipe leaked and taking his train. Believing Frank should not have to do rescues, the Small Controller realised the railway needed another engine, which came in the form of Jock. [1]

Frank is often described as being inclined to be grumpy and becomes irritable quite easily, especially when he feels left out of things. When in a bad mood, Frank tends to be uncooperative, leading to mishaps such as his incident with the shed wall. Though he may have a bad attitude at times, Frank knows the importance of friendship and teamwork and will always help a friend in need.

Frank is based on Perkins, an engine who works on the Ravenglass and Eskdale Railway. Unlike Perkins, Frank has added round buffers.

Prior to his concept being finalised, Frank was to have a steam-outline shape, as carried by Perkins between 1933 and 1984.[2] 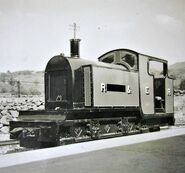 Perkins as the Passenger Tractor in 1951, before losing the fake steam outline

Frank is painted light grey with a red stripe around his body. He has a red nameplate with a gold border on his sides with his name on them, also in gold. His buffer beams are painted red with silver buffers.

Originally, when he was intended to be a steam-outline diesel, Frank was specified as being green.

In James and the Diesel Engines and Other Stories Frank is portrayed with a whistle despite being a diesel. It is the same stock train whistle used for Rainbow Sun and Rocky.

Arlesdale Railway
* RWS only
Español 日本語 Polski Русский
*Disclosure: Some of the links above are affiliate links, meaning, at no additional cost to you, Fandom will earn a commission if you click through and make a purchase. Community content is available under CC-BY-SA unless otherwise noted.
Advertisement