Fred Pelhay is a privately-owned truck who is used for transporting coal on the Little Western.

When Oliver was pushed into the turntable well by the troublesome trucks and later returned from the railway works, Fred Pelhay was one of the trucks who teased him. They stopped their teasing towards Oliver, when he pulled S.C. Ruffey, their leader, apart.

Fred is based on a 8 plank fixed-end open wagon that is used on the railways, such as British Railways.

Fred Pelhay's basis
Add a photo to this gallery

Fred Pelhay is painted bright orange with words painted in white on both sides. Only the words "FRED PELHAY" are visible in the illustration, but the writing on the Wooden Railway model reads "FRED PELHAY COAL CO.". 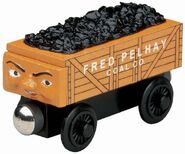 Wooden Railway
Add a photo to this gallery
North Western Railway
* RWS only | ** T&F only | --- Dropped
The Little Western
* RWS only | ** T&F only | *** Other Media only
Retrieved from "https://ttte.fandom.com/wiki/Fred_Pelhay?oldid=1813395"
*Disclosure: Some of the links above are affiliate links, meaning, at no additional cost to you, Fandom will earn a commission if you click through and make a purchase. Community content is available under CC-BY-SA unless otherwise noted.