“What's better than a snow bus? An ice engine!”
―Thomas to Bertie

Frozen Engine is a magazine story.

Thomas is taking the Fat Controller to dinner with the Mayor at Wellsworth Town Hall. On the way, he spots a snowman and is very impressed with the children's efforts. While he steams along his branch line, he plays a game of I-spy and spots a splendid castle made out of snow.

He rushes to the bus depot to tell Bertie about the wonderful things he has seen made out of snow. Bertie tells Thomas that the off-duty bus drivers have made a snow model of him. Bertie is sure Thomas will not see something better than a snow model of him.

That night, it is freezing cold again and, the next day, Thomas' wheels spin as he comes out of the sheds. He slips into the yard, then off the rails and finally hits a water-tower head-first. Water gushes out into a nearby truck who is now very cold.

The water quickly freezes into a huge block of ice. The driver opens up the truck and the big block slides out onto the track. Thomas is sorry about the accident, but the Fat Controller says that there is no harm done and the water-tower is not damaged, but they will have to break up the ice block. Thomas has an idea and the Fat Controller thinks it is a brilliant one.

The Fat Controller rings the sculptor who comes to the station and starts work on the slab of ice. Soon, the ice has been transformed into a work of art. When it is finished, Bertie arrives at the station and Thomas tells him that an ice engine is better than a snow bus anyday. Bertie has to agree. 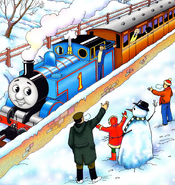 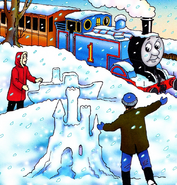 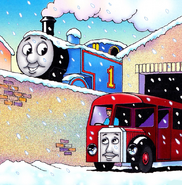 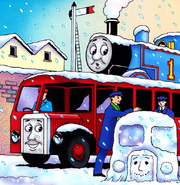 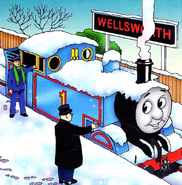 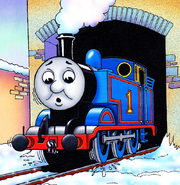 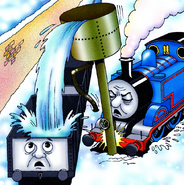 Add a photo to this gallery
Retrieved from "https://ttte.fandom.com/wiki/Frozen_Engine?oldid=1696761"
Community content is available under CC-BY-SA unless otherwise noted.