Full Steam to the Rescue!

Whale of a Tale and Other Sodor Adventures

Duty calls at the Sodor Search and Rescue Centre! Rocky is called in to action to rescue poor derailed Henry. But when Rocky becomes derailed himself, who will come to his aid? The alarm is sounded at the Search and Rescue Centre and the fast and fearless team race to the rescue. But with each vehicle trying to rescue him alone, can they work as a team to get Rocky back on the tracks?! Full steam ahead with Thomas and his engine heroes! 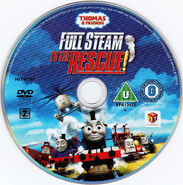 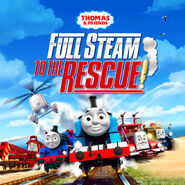 Google Play cover
Add a photo to this gallery

Bonus features menu
Add a photo to this gallery
Retrieved from "https://ttte.fandom.com/wiki/Full_Steam_to_the_Rescue!?oldid=1661969"
*Disclosure: Some of the links above are affiliate links, meaning, at no additional cost to you, Fandom will earn a commission if you click through and make a purchase. Community content is available under CC-BY-SA unless otherwise noted.