“Let me guess, are you pretending to be a boat?”
―Emily guessing why James is stuck in a flood

Fun and James is a magazine story.

James is taking the "School Special" train to the Sodor Transport Museum. At a signal, he meets Emily. He is surprised to see her hauling trucks instead of coaches. Emily explains that the trucks have to be delivered in a hurry and she was the only spare engine. James soon drops the children off at the museum.

The next day, James goes to fetch more passengers, but a burst waterpipe has flooded the track. James cannot stop in time and skids into the water. Emily has to collect the passengers instead. James feels foolish with his front wheels stranded in the water. As she passes, Emily guesses that James is trying to be a boat. 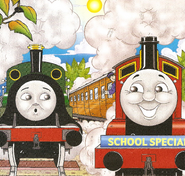 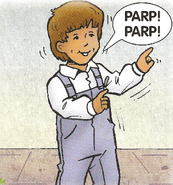 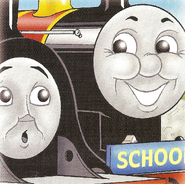 Add a photo to this gallery
Retrieved from "https://ttte.fandom.com/wiki/Fun_and_James?oldid=1720982"
*Disclosure: Some of the links above are affiliate links, meaning, at no additional cost to you, Fandom will earn a commission if you click through and make a purchase. Community content is available under CC-BY-SA unless otherwise noted.