Fun at the Carnival

Fun at the Carnival! is a US magazine story, illustrated using photographs from the television series.

At the docks, Rosie couples up to the special train, not knowing that Emily is already coupled to the other end. Rosie pulls hard to get going, but does not realise that she has broken a coupling in the process. During her journey, Stepney whistles to tell Rosie that she is missing half of her train, but one of her trucks fall in front of him, leaving him stuck and getting covered in sticky pink sugar. Emily has been following Rosie, but more things fall off Rosie's trucks and block Emily's path.

At the station, Sir Topham Hatt is not happy at all. He tells Rosie that there will be no carnival now. Rosie feels terrible; she only wanted to help, but made things much worse. She decides to put things right by collecting all of the trucks and then being Emily's back engine just like Sir Topham Hatt had asked.

First, she takes Rocky to clear Emily's path and apologises for her behaviour. After Emily forgives her, she collects the rest of the trucks and goes straight back to Emily to be her back engine.

As Emily and Rosie finally pull into the station with the carnival special, everyone cheers. Rosie hopes that she can work with Emily again; teamwork is the best way to get things done. 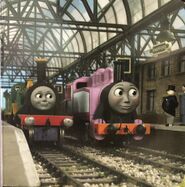 Emily, Rosie and the Fat Controller 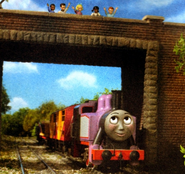 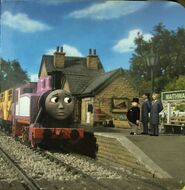 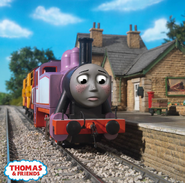 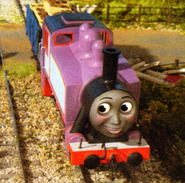 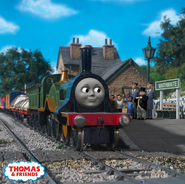 Add a photo to this gallery
Retrieved from "https://ttte.fandom.com/wiki/Fun_at_the_Carnival!?oldid=1721330"
*Disclosure: Some of the links above are affiliate links, meaning, at no additional cost to you, Fandom will earn a commission if you click through and make a purchase. Community content is available under CC-BY-SA unless otherwise noted.