Funnel Trouble is the fourth story in the 1986 Annual.

Poor Oliver is feeling stuffed up in his smokebox, but the inspector cannot find anything wrong. He becomes so ill that Duck has to take his ballast wagons for him. After giving some trucks big bumps, Duck's driver later finds that his water gauge is dropping rapidly. It turns out a plate was loosened when Duck bumped the trucks and his tank is leaking.

Algy takes Duck's passengers, but when Oliver tries to help Duck home, something shoots out of his funnel. He had something jammed there and now feels well enough to pull his ballast train. 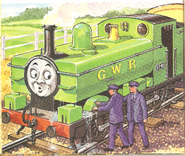 Add a photo to this gallery
Retrieved from "https://ttte.fandom.com/wiki/Funnel_Trouble?oldid=1554023"
Community content is available under CC-BY-SA unless otherwise noted.