George is a grumpy steamroller whose interactions with engines generally lead to trouble. He is owned by the Sodor Island Council.

George immediately entered a conflict with the engines of the Skarloey Railway in 1960, while he was assisting with road widening works near Cros-ny-Cuirn. At the time, Sir Handel was boasting about his broad tyres, which the other engines referred to as "steamroller wheels". Skarloey tried to trick Sir Handel into confronting George to divert his attention. George and Sir Handel met and immediately disliked each other. One afternoon, Sir Handel took a train down the line parallel to the site where George was working. George would not give the train enough room to pass and rammed his front roller into Sir Handel's train. The train and construction crews argued until a policeman broke them up and a barrier was built between the road and the rails. George's work was finished and he was taken away, although Sir Handel took the credit for this.

George later worked near Thomas' Branch Line, still grumbling about railways. He soon met Daisy and told her that friends of his have paved roads over old railway lines and he was eager to do the same on Sodor. Daisy tried not to cross him, fearing he would follow through with his threat. George and his crew left some road cones where they were working. These got blown over by the wind into the level crossing, fell into Daisy's path and were pulled under, jamming her brakes. Daisy felt certain he did this on purpose.

As in the Railway Series, George took an instant disliking to the little engines, Sir Handel in particular, which resulted in rivalry and an accident.

Once, on Lady Hatt's birthday, the Fat Controller was running late. His car had broken down and when he was offered a ride by Caroline, she soon overheated. George pulled up alongside them and called Caroline "a disgrace to the roads". George's driver, who was fairly even-tempered, offered the Fat Controller a ride, but George lost control and veered into a pool of mud.

George later worked at Boulder Quarry with Skarloey and Rheneas and made rude remarks despite their assertion that their stone would be used to pave George's roads. George was still rude while Percy carried him on a flatbed to his new work site.

George later created a road on an old railway line, but was intentionally careless when he paved the road over a level crossing. This later caused Thomas to derail and crash. Finally, George refused to allow Duck to pass him at the yard. As a result, a truck from his train was still on the Main Line. When the express came through, Gordon collided with the truck, smashing it. The Fat Controller was furious with these recent disturbances and punished George by taking him off of the roads for a week to be used as machinery at the lumber mill.

For a long time afterwards, George had little actual contact with the engines. On one occasion, Thomas retrieved him to repair the runway of the new airport at the last minute. In the ninth and tenth series, he was seen working at McColl Farm.

George is a grumpy, bad-tempered and rude steamroller. He is no friend of the railway, often heard rebelling that "railways are no good" and that they should be pulled up and turned into roads. George is happiest when he is rolling, but enjoys causing bother for the engines across the island too. He is grouchy, disagreeable and his unpleasant attitude and stubborn nature are often the cause of chaos and disruption, an example being when he crashed into Sir Handel's train for calling him a "great clumsy road-hog". He also does not get along with many road vehicles, either, as he insulted Caroline after she broke down.

He can occasionally show his use if there is tarmac to be flattened and was very important in helping the steam engines and diesel engines in repairing the runway at the Sodor Airport, so that the first aeroplane could land. This shows that even he has a good side in him.

George is based on an Aveling-Barford R class steamroller. 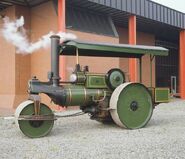 George's basis
Add a photo to this gallery

In the Railway Series, George is painted in an all-over green livery with gold boiler bands and a yellow roof. In Thomas Comes Home, he was a darker shade of green, almost teal. His name is painted yellow on both sides of his smokebox.

In the television series, George is painted green with red lining, gold boiler bands, and black smokebox and funnel with a brass cowl. His front-forks are painted bright red and his name is painted on both sides of his boiler in white.

Non-rail vehicles
* RWS only | ** T&F only | *** Other Media only
Retrieved from "https://ttte.fandom.com/wiki/George?oldid=1813089"
*Disclosure: Some of the links above are affiliate links, meaning, at no additional cost to you, Fandom will earn a commission if you click through and make a purchase. Community content is available under CC-BY-SA unless otherwise noted.