Gertrude and Millicent are two bogie coaches who work on the Skarloey Railway. They formerly worked on the Mid Sodor Railway.

The two coaches were rescued from the Mid Sodor Railway and restored while Skarloey was being mended. As they run on bogies, Sir Handel considers them the only "proper" coaches on the railway. Millicent has a small covered compartment for a guard where they can sell tickets, although Peter Sam does not like that as he believes that guards need vans, referring to this compartment as a "cupboard place".

Gertrude and Millicent are based on the Talyllyn Railway's ninth and tenth carriages, respectively.

Millicent's basis
Add a photo to this gallery

Gertrude and Millicent are painted blue with cream window surrounds.

Sir Handel with Gertrude and Millicent

Peter Sam with Gertrude and Millicent

Rheneas with Gertrude, Millicent and a third coach 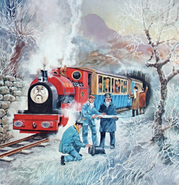 Add a photo to this gallery
Mid Sodor Railway
* RWS only | ** T&F only
Skarloey Railway
* RWS only | ** T&F only
Retrieved from "https://ttte.fandom.com/wiki/Gertrude_and_Millicent?oldid=1754998"
*Disclosure: Some of the links above are affiliate links, meaning, at no additional cost to you, Fandom will earn a commission if you click through and make a purchase. Community content is available under CC-BY-SA unless otherwise noted.