“Help! The giant engine's after me!”
―Oliver

Giant Puffer is a magazine story.

Duck is pulling a Pantomime Special. When he returns to the theatre to take everyone home, Stephen and Bridget tell Duck about the pantomime they watched called "Jack and the Beanstalk". That night, Duck tells Oliver the story. Oliver listens with interest, but the story gives him nightmares about being chased by a giant train.

The following morning, Oliver is sent to help Duck collect a goods train from the Harbour. When Oliver arrives, the mist is so thick, he cannot see a thing - including Duck. He checks by a huge shipping container where he sees a tall funnel. Oliver is so scared he races off, until he hears a friendly voice calling him back. It is Duck and it turns out that Cranky had dropped a pipe on Duck's funnel by accident. 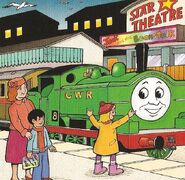 Add a photo to this gallery
Retrieved from "https://ttte.fandom.com/wiki/Giant_Puffer?oldid=1690648"
*Disclosure: Some of the links above are affiliate links, meaning, at no additional cost to you, Fandom will earn a commission if you click through and make a purchase. Community content is available under CC-BY-SA unless otherwise noted.