Glennock (a corruption of Gleih-knock, Sudric for "Blue Hill") is a small hamlet and the middle station of the Skarloey Railway.

There was no village here in 1864 when the railway builders came. The only house in sight was a lonely inn, "The Glennock", which stood on the pack-horse trail at a spot where some rough tracks led to a number of farms. The landlord himself, whose father kept the inn before him, does not know for certain why it was given that name. "It may be," he says, “because in springtime a wealth of wild flowers gives the hill behind us a shimmering blue tinge; or it may even be that the pack-horse boys who used the inn as a staging post caught here, on their upward journey, the first glimpse of Ward Fell, their destination, looming blue in the distant haze.”

The inn certainly stood on the old pack-horse trail; but the landlord maintains that there was an inn here long before mining began, which was a house of call on an ancient trade route over the hills. For this reason it was important to the scattered lonely farms in the area. When travelling traders arrived, word would be sent to the farmers who then came to barter produce for goods which the pedlars had to sell.

Since in 1864 the inn was the only house in sight, and since according to the survey, this would be the approximate halfway point on the railway, a passing loop was laid in, called Glennock after the inn. A small platform, a siding and passenger shelter followed. Subsequently a sizeable hamlet grew up around the station. Cottages were built for railway lengthmen, quarrymen found it a convenient place to live, and as a result the station developed differently from others on the line. Most were unstaffed platforms with a siding and a slate slab shelter. Glennock was the mid-point where in the early days, gravity-operated ore trains going down passed steam-hauled passengers and empties coming up. Glennock therefore needed resident staff, four at first, later reduced to two. The Stationmaster and his wife lived on the top floor of the building seen on the platform, with Booking-Office and Waiting Room below. The Waiting Room was never used as such, and after a while the Stationmaster‘s wife obtained permission from Sir Handel Brown to turn it into a Post Office/General Store.

The Inn is in front of the trees on the left of the station, while a Wesleyan Chapel adjoins the station on the right. That in itself is an interesting feature. Still more interesting is the fact that there is a door into the Chapel from the platform. Methodism is strong in this valley. Sir Handel Lloyd Brown’s father was a life-long Methodist and so is he. Sunday travel was frowned on by the SR, and there were no ordinary trains; but travelling to church was different. They were not able to keep it up during “the lean years”; but their “Chapel Trains” were a great feature of the railway till the 1930’s. The timings varied according to the availability of a Minister, or Local Preacher, but every Sunday either in the morning, afternoon, or evening, an Up train would leave from Crovan's Gate, and a Down train left Skarloey. Both trains would be timed to reach the passing loop at Glennock 20 minutes before the Service was due to start. Once in the loop, passengers and crew went to Chapel, only excepting the crew member whose turn it was to stay on duty with the trains. When Service was over, the engines ran round their respective trains ready for the return journey. Two engines were needed on Sundays. Normally in the old days the weekday traffic did not warrant the use of more than one engine in steam, as loaded ore and slate trains came down by gravity. This practice was only stopped in 1926 when a gravity slate train ran through the Wharf and spread itself all over the NWR Main Line.

Glennock’s position made it suitable not only as a Chapel centre, but a School centre as well. Before the Second World War, the school here catered for all ages, but since 1948 it has taken Juniors only. The Seniors travel daily to schools in Crovan’s Gate. Beyond the station the line swings north once more through arable and pasture land, passing scattered cottages and farms. From each house there is usually a well marked path leading to a stile or gate in the lineside hedge. These are unofficial, but traditional Request Stops for certain trains and are well used on Market Days

In the television series, Glennock consists of a small wooden building with a canopy located in the middle of the countryside. The station gained a second track in the eighteenth series, and some foilage appears to be missing. A coal staithe was also added opposite the second track, and the water tower gained a different shape.

Glennock Station in the Railway Series

Duncan complains about passengers and getting no rest

Sir Handel and Peter Sam at the station

Skarloey at the station

Duke at the station
Add a photo to this gallery

Glennock in the winter
Add a photo to this gallery

Rheneas at the station
Add a photo to this gallery

Aberllefenni, Glennock's second basis
Add a photo to this gallery 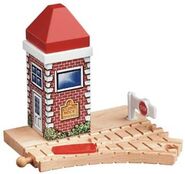 Bachmann
Add a photo to this gallery
Skarloey Railway
* RWS only | ** T&F only
Retrieved from "https://ttte.fandom.com/wiki/Glennock?oldid=1696483"
Community content is available under CC-BY-SA unless otherwise noted.