“Your stories are just pie in the sky, Percy.”
―Thomas

One day, the engines decide to play a game where they look out for things in the sky. As Percy waits at a signal, he spies an odd shape gliding silently and thinks it is a big kite. Percy races back to the main station to tell the others, but they do not believe little Percy.

The next day, Percy sees the object again. This time it is closer and Percy can see a man hanging underneath. The driver tells him it is a hang-glider that is coming into land. Sure enough the hang-glider dips close to the track and a gust of wind sweeps the glider into a shallow pond. Percy stops and his crew help the man out of the water. That night, Percy tells the other engines about his adventure, but they still did not believe him.

Next morning, the man with the hang-glider telephones the Fat Controller to tell him about a special event. The event is a hang-gliding display and the sky is full of hand-gliders. Percy has a pair of flags given to him by the Sodor Hang-gliding Club tied to his buffers. Percy asks Thomas if he believes him now. Thomas does and tells Percy he is flying something too. 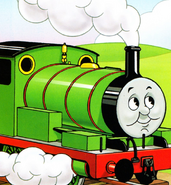 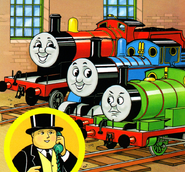 Add a photo to this gallery
Retrieved from "https://ttte.fandom.com/wiki/Glider_Rider_(2005)?oldid=1722138"
*Disclosure: Some of the links above are affiliate links, meaning, at no additional cost to you, Fandom will earn a commission if you click through and make a purchase. Community content is available under CC-BY-SA unless otherwise noted.