Thomas the Tank Engine
and Friends 130

“Botheration! My wheels keep slipping on the leaves!”
―Thomas

Going Slowly! is a magazine story.

It is Autumn on Sodor and Henry is sad to see summer go. Henry is making his way down the main line when he has to stop suddenly due to a landslide on the track. Henry is reversed to the previous station and The Fat Controller is contacted. He sends for Terence to push the earth away.

Henry's passengers are told to disembark and then Henry goes back up the line to see Terence. Henry tells Terence to be quick but Terence insists he is going as fast as he can. James then shows up on the other line and also orders Terence to go faster, teasing him about his caterpillar treads.

When the line is finally cleared, Henry recollects his passengers and he and James continue onwards. The two engines think that if hey had caterpillar treads, they would never get their work done in time. As the season continues, the engines find traveling along tracks covered in autumn leaves to be quite difficult and are ordered to go slow. Now it is Terence's turn to tease the engines. This leaves the engines sorry about what they had said to Terence. 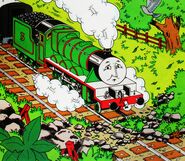 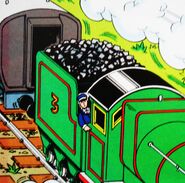 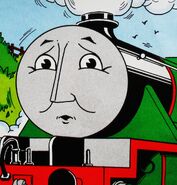 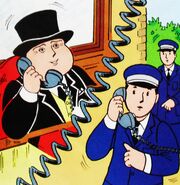 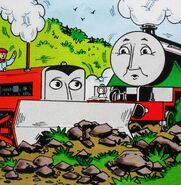 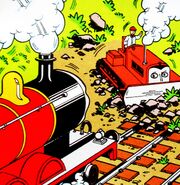 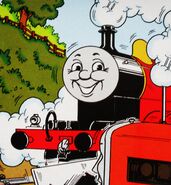 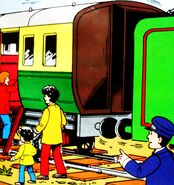 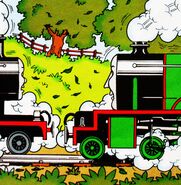 James and Henry pass each other
Add a photo to this gallery
Retrieved from "https://ttte.fandom.com/wiki/Going_Slowly!?oldid=1974164"
*Disclosure: Some of the links above are affiliate links, meaning, at no additional cost to you, Fandom will earn a commission if you click through and make a purchase. Community content is available under CC-BY-SA unless otherwise noted.