Duke is a very old engine who was once buried under a landslide for a long time. Nowadays, he works on the Sodor Railway where he shows passengers all of the magnificent sights of the island. Duke pulls his train through the valleys and over the lakes. Some of the other engines think Duke is old-fashioned, but he does not mind. Duke merely smiles and is grateful that the Fat Controller does not make him shunt trucks in the yard.

At the end of the day, Duke can sometimes be a bit grumpy, but his driver takes him home and gives him a long, cool drink. Duke says goodnight and is soon dozing in the shed. 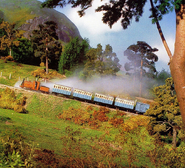 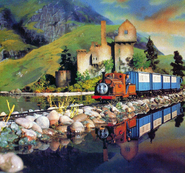 Add a photo to this gallery
Retrieved from "https://ttte.fandom.com/wiki/Good_Old_Duke!?oldid=1690661"
*Disclosure: Some of the links above are affiliate links, meaning, at no additional cost to you, Fandom will earn a commission if you click through and make a purchase. Community content is available under CC-BY-SA unless otherwise noted.