“No more shortcuts for me!”
―Gordon

Gordon's Shortcut is a magazine story illustrated using photographs from the television series. It was later published as part of the 2013 Thomas Annual.

Gordon and Stanley both want to arrive at Great Waterton first. The first engine there gets to take some very important passengers and the second has to take workmen. Gordon wants to get there first, so he decides to take a shortcut, but eventually gets lost. After a while, he sees that Stanley is trapped by logs on his line. Gordon calls for Harvey's help and he soon moves the logs. Stanley and Gordon arrive at Great Waterton together and Gordon decides not to take a shortcut again. 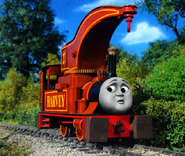 Add a photo to this gallery
Retrieved from "https://ttte.fandom.com/wiki/Gordon%27s_Shortcut?oldid=1690712"
*Disclosure: Some of the links above are affiliate links, meaning, at no additional cost to you, Fandom will earn a commission if you click through and make a purchase. Community content is available under CC-BY-SA unless otherwise noted.