“Bertie told me they are repairing his road next week-that means tar wagons. You will be pulling tar wagons all week and will get very dirty.”
―James

Gordon's Surprise is a magazine story.

One day, Sir Topham Hatt gives Henry the job of pulling the express and James gets to take the other trains that Gordon usually pulls. Gordon is confused, but Sir Topham Hatt says he has "special duties" for him. Henry believes that Gordon's special is to take long lines of stone trucks to the harbour. James thinks that Gordon will be taking tar wagons to help fix the roads by the railway, which will cause Gordon to get dirty. When Sir Topham Hatt returns, Gordon objects to his "special duties". Sir Topham Hatt laughs and tells Gordon not to worry as his special is to represent Sodor in a steam engine show being held next week. Gordon is happy and puffs away to tell the others about the job he has been given. 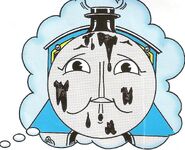 Add a photo to this gallery
Retrieved from "https://ttte.fandom.com/wiki/Gordon%27s_Surprise?oldid=1690708"
Community content is available under CC-BY-SA unless otherwise noted.