Gordon's brothers and sisters were the LNER A1 and A3 Pacifics built between 1922 and 1935. They were the remaining relatives of Gordon who were mentioned in passing in the Railway Series.

In Enterprising Engines, Sir Topham Hatt mentions that Gordon's brothers and sisters have all been scrapped, with the exception of Flying Scotsman. This made Gordon feel sad, so the Fat Controller arranged for Flying Scotsman to visit in order to cheer him up.

In James and the Diesel Engines, Gordon told Donald and Douglas that he and his siblings used to be painted green. He also bought up the fact he was green in his youth in Gordon Goes Foreign.

According to the annuals, Sir Topham Hatt is so impressed with Gordon that he wishes he could purchase another engine just like him. Though, he vows never to tell Gordon as this would make the big blue engine jealous. 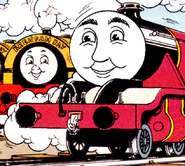 The Poster Engine
Add a photo to this gallery
United Kingdom
* RWS only | ** T&F only
Retrieved from "https://ttte.fandom.com/wiki/Gordon%27s_brothers?oldid=1740322"
*Disclosure: Some of the links above are affiliate links, meaning, at no additional cost to you, Fandom will earn a commission if you click through and make a purchase. Community content is available under CC-BY-SA unless otherwise noted.