Gordon is a fictional standard gauge tender locomotive created by the Rev. W. Awdry. He is the No. 4 engine on the North Western Railway.

He first appeared in The Railway Series book, The Three Railway Engines, which was published in 1945. His last appearance was in Thomas and his Friends, published in 2011.

In 1984, Gordon was introduced in the first series of Thomas the Tank Engine and Friends and has appeared in every series as one of the main characters since.

Gordon’s original model was custom built to run on gauge 1 track for the Unaired Pilot. The model was built with a perspex body shell by model maker Martin Gill. It was painted using glossy car body paint and lined with red automotive pinstripe tape with the numbers being custom cut vinyl stickers. The axleguards on Gordon's tender were made by Tenmille. The chassis was built from scratch, it was never tested before being filmed in front of the camera and proved to be unreliable.

Gordon's model from the Unaired Pilot 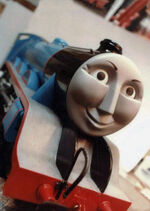 After the first series was approved for production the model was then fitted with a new chassis that was sourced from a gauge 1 locomotive made by Märklin, the BR 78. The footplate slope was cut to not hang as low which allowed for the bufferbeam to be raised up and pushed further back, this was likely done due to the new chassis and for the buffers to line up with rolling stock better. The front of the boiler was cut back to move the face further back and lamp irons were added. The insides of the cylinders were cut due to the shortened front bogie contacting them when going around curves.

Gordon’s perspex model was originally AC powered as this is how the Märklin locomotives were powered. This required the polarity switch which was originally mounted in front of the main motor to be moved to the tender, allowing space for the smoke mechanism which sat in between the motor and eye mechanism. During a refurbishment his AC motor was replaced by a DC motor to allow for easier running and maintenance.

The scratch built chassis was later cut up and used as scrapyard dressing. 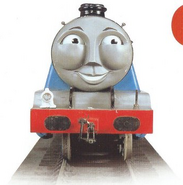 During the production of the tenth series two new models of Gordon were built. This was due to the original model being twenty-two years old at this point and the tight filming schedules meant there was very little room for emergency repairs.[1]

The new models were made out of brass, equipped with a CNC machined aluminium chassis powered by a DC motor. From this point onwards the perspex model would only appear in scenes that would damage the brass models.[1]

Gordon's brass model
Add a photo to this gallery

Twenty-two different facial expressions were sculpted for Gordon, although only twenty were used onscreen. The faces were first sculpted in clay and from that resin casts were made of a silicone mould. Some of Gordon’s faces were duplicated in case the crew needed to a face to look dirty and clean on the same day of shooting. Three of Gordon's face masks are owned by Twitter user ThomasTankMerch.

Gordon's happy face mask as it first appeared during the Clearwater Features... (1984-1986)

... which later had its eye socket size reduced from Thomas and the Magic Railroad all the way until the end of the model era (2000-2008)

Gordon's neutral face mask that only appeared between the first and ninth series. (1984-2005)

Gordon's sulky face mask that only appeared in the first series episode, Whistles and Sneezes... (1984)

...and a promotional image from the third series episode, Gordon and the Famous Visitor... (1991)

...until it last appeared in a promotional image from the sixth series episode, Harvey to the Rescue (2002)

Gordon's original laughing face mask that only appeared in both the second and third series (1986, 1991)

...and last appeared in the eighth series Learning Segment, Helping One Another (2004)

Gordon's scared face mask that only appeared between the second series and The Great Discovery, excluding the third and fourth series (1986, 1998-2008)

Gordon's concerned face mask that only appeared in both the second and eighth series (1986, 2004) (It is currently on his brass model which is on display at the Hara Model Railway Museum)

Gordon with a new and recasted laughing face mask that only appeared during the Gullane Entertainment... (2002, 2003)

Gordon's guilty face mask that only appeared in both the tenth and eleventh series (2006, 2007) 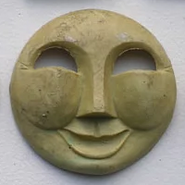 Gordon's laughing face mask, during the production of the second series (1986)

Gordon's soft-looking shocked face mask, during the production of the second series (1986)

Page one of Gordon's face masks during production of the sixth series (2002) [Note: Gordon's unused yawning face on the last right bottom]

The twelfth series marked the beginning of the show's transition into CGI and the characters' faces were animated through CGI with the aid of motion-capture animation. The physical models' molded faces were replaced by white targets with triangles to fix a computer-animated face in post-production. Gordon’s resin faces were only used in background shots.

Gordon’s gauge 1 model has gone through several aesthetic changes in the television series:

Some of Gordon's faces have been seen mistakenly on Henry in Peter Sam and the Refreshment Lady, Thomas and the Billboard and Heave Ho Thomas!.

One of Gordon’s brass models is now on display at Hara Model Railway Museum. It had previously been on display at Nitrogen Studios.

In 2009, the series introduced Computer-Generated Imagery (CGI) as a replacement for the show's long-standing live-action models. Gordon was recreated from scratch in CGI by Nitrogen Studios. His model was "hand-sculpted" in Maya, a 3D animation and modelling software.

Photographs of Gordon's Gauge 1 model were used for referencing. According to Greg Tiernan, every detail of the original television series models for each character is carefully reproduced in the CGI model. The models are subjected to many rounds of review before they are submitted to HiT Entertainment for final input and approval.

In 2016, a new render of Gordon was made by Arc Productions for the special The Great Race. This render depicted him in streamlined casing, with everything bar the face being completely changed. The "Shooting Star" render only appeared in The Great Race.

Gordon's CGI model was identical to his Gauge 1 model but has had slight modifications, these include:

The following pantone colours are used on Gordon's CGI model: 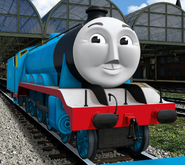 Gordon as the Shooting Star

In the twenty-third series episode, Mines of Mystery, Gordon's CGI cab interior was reused for Lorenzo's.

Retrieved from "https://ttte.fandom.com/wiki/Gordon/Behind_the_Scenes?oldid=1736231"
*Disclosure: Some of the links above are affiliate links, meaning, at no additional cost to you, Fandom will earn a commission if you click through and make a purchase. Community content is available under CC-BY-SA unless otherwise noted.