In Big World! Big Adventures!, Thomas and Nia arrived at this harbour alongside Ace, to follow him through the Amazon Rainforest on his around-the-world trip. Sir Topham Hatt later visited the harbour in hopes of catching up to Thomas.

Thomas revisited the harbour in the twenty-third series and accidentally caused Cassia to knock some crates of mangoes off of a flatbed Gabriela was shunting which Gustavo ran into. Raul later challenged Thomas to various competitions here. 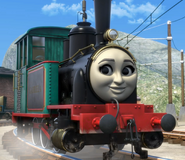 Gabriela
Add a photo to this gallery 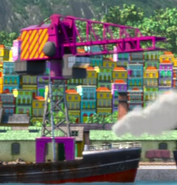 The Pink Hammerhead Crane (Big World! Big Adventures! only)
Add a photo to this gallery

Guanabara Bay in the twenty-third series

The real Guanabara Bay
Add a photo to this gallery
Brazil
Retrieved from "https://ttte.fandom.com/wiki/Guanabara_Bay?oldid=1767814"
*Disclosure: Some of the links above are affiliate links, meaning, at no additional cost to you, Fandom will earn a commission if you click through and make a purchase. Community content is available under CC-BY-SA unless otherwise noted.