After John T. Kenney resigned from The Railway Series due to his failing eyesight, editor Eric Marriott asked Swedish-born artist Gunvor Edwards to try her hand at illustrating the Reverend W. Awdry's latest book, Stepney the "Bluebell" Engine. Gunvor accepted the commission and decided to start her work well into the book with the illustration of the Diesel standing alongside the other engines in their shed. However, Gunvor had difficulty with the small space she was required to work with (approximately ten by six inches). She turned to her husband, Peter, who was, as he put it, "trying to be a 'serious' artist." Although he was no more able to imitate earlier illustrations of The Railway Series than his wife, both Marriott and the Reverend W. Awdry were satisfied with his pictures. Although Edwards' style was more impressionistic than that of any previous artist of The Railway Series, Wilbert liked his work because he drew from life and "obviously had an affection for the characters."

Edwards often went on location to sketch real locomotives and landscapes to get inspiration for illustrations. "At a time in our life," said Edwards, "of short funds and few breaks, the family had an excuse to explore the Welsh Coast, Lakeland, Cornwall and Devon, Sussex and Kent with a steam trip to cap it all!" This kind of dedication impressed the author; as he recalled, "Peter was so keen on getting authentic drawings of the locomotives that he went down to Llanberis in January to visit workshops of the Snowdon Mountain Railway."

Edwards' art style was more impressionistic than the bright, juvenile-oriented tone of Dalby's art or Kenney's relatively monochrome portraits, imbibing the series' art with more subtlety of lining, thin brush strokes, and an emphasis on the lighting of scenes.

Edwards continued working as the illustrator of The Railway Series until 1972 with the publication of the final book, Tramway Engines. He also illustrated the Surprise Packet in 1971 at a time when Awdry had writer's block, as well as the box art for the 1965 Meccano Percy set. His illustrations appear to have inspired Edgar Hodges's work on the 1979 and 1980 annuals. 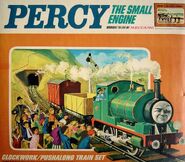 The Railway Series
Español עברית Polski Русский
*Disclosure: Some of the links above are affiliate links, meaning, at no additional cost to you, Fandom will earn a commission if you click through and make a purchase. Community content is available under CC-BY-SA unless otherwise noted.
Advertisement