Hackenbeck is a small hamlet to the west of Ffarquhar, serviced by a halt on Thomas' Branch Line. Thomas once got stuck in a snowdrift outside the nearby tunnel. The station is just north of the Hackenbeck Tunnel. A stream passes under the railway line east of the station.

Mrs. Kyndley lives in a cottage south of the tunnel.

Thomas and Percy make up their friendship once again 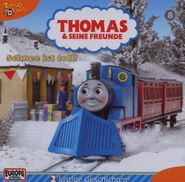 The station at Drayton Manor
Add a photo to this gallery

The station in Stop, Train, Stop!
Add a photo to this gallery
Ffarquhar Branch Line
* RWS only | ** T&F only
Retrieved from "https://ttte.fandom.com/wiki/Hackenbeck?oldid=1780063"
*Disclosure: Some of the links above are affiliate links, meaning, at no additional cost to you, Fandom will earn a commission if you click through and make a purchase. Community content is available under CC-BY-SA unless otherwise noted.