Several hang gliders have been seen in the magazine stories. Most of them belong to members of the 'Sodor Hang Glider Club'.

Once, Percy mistook one of the hang gliders for a giant kite until he got to see one up close, coming in to land. The glider tries to land beside the track, but ends up getting blown into a shallow pond. Percy's driver and fireman helped to fish the man and the glider out of the water and Percy gave the man a ride home. The next day, the man who Percy had helped save, rings Sir Topham Hatt to arrange a special train to ferry passengers to a hang glider display. Percy is chosen for the job and he is presented with some flags from the hang glider club.

Rusty once spotted a hang glider and thought it was a big bird.

A hang glider also appeared in the magazine, The UFO. 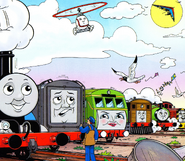 Add a photo to this gallery
Non-rail vehicles
* RWS only | ** T&F only | *** Other Media only
Retrieved from "https://ttte.fandom.com/wiki/Hang_Gliders?oldid=1637619"
*Disclosure: Some of the links above are affiliate links, meaning, at no additional cost to you, Fandom will earn a commission if you click through and make a purchase. Community content is available under CC-BY-SA unless otherwise noted.