“This is the best birthday present ever!”
―Sir Topham Hatt

8 January 2013
Happy Birthday, Sir! is a magazine story, it was illustrated by using images from the CGI television series. It was later published in the 2014 Thomas Annual.

It is the Fat Controller's birthday and he arrives at Brendam Docks in Winston. He gives Thomas his jobs for the day and tells him to take Winston with him on his rounds. After the Fat Controller leaves, Salty tells everyone a story about the Fat Controller when he was younger. According to Salty's story, the Fat Controller used to ride around the stations on Sodor in an open-topped carriage on his birthday. Salty adds that the carriage has been missing for many years now. Thomas thinks it is a great story and heads off to start his jobs.

At Maron, Thomas is coupled to a flatbed of apples for Farmer Trotter's Pig Farm. Thomas goes to look for Winston to tell him about the job, but Winston is not there. Soon Winston returns and says that he was looking for something. Thomas tells Winston off for leaving. At the farm, Thomas has a chat with Farmer Trotter. Winston rolls away again and when he gets back, he tells Thomas that he had been searching for something. Thomas is not happy and tells Winston that he is not being really useful.

At the Whispering Woods, Thomas is coupled to a flatbed of logs. He looks around and realises that Winston has disappeared again. When Winston returns, he tells Thomas that he has found something. However, Thomas is not interested and instead tells Winston to travel directly in front of him so that he cannot run off anymore. On their way back, Thomas does not see Winston stop and crashes straight into him. Thomas is cross, but Winston says that he has something to show him. There, in an overgrown siding, is the Fat Controller's old birthday carriage. Thomas suggests that they take the carriage to the Sodor Steamworks where it can be fixed. Then Thomas and Winston head to the Docks to find Sir Topham Hatt.

Thomas and Winston take the Fat Controller to Knapford. There, he sees Edward steam in with the fully-restored birthday carriage. The Fat Controller is very happy and declares that the carriage is the best birthday present ever. Thomas peeps with delight; it turns out Winston had been useful after all. 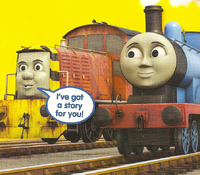 Thomas at the platform

An overgrown truck
Add a photo to this gallery
Retrieved from "https://ttte.fandom.com/wiki/Happy_Birthday,_Sir!_(2013_magazine_story)?oldid=1870634"
*Disclosure: Some of the links above are affiliate links, meaning, at no additional cost to you, Fandom will earn a commission if you click through and make a purchase. Community content is available under CC-BY-SA unless otherwise noted.