19 March 2014
Happy Birthday, Sir! is a magazine story, it was illustrated by using images from the CGI television series.

Thomas speeds to his first job at Farmer Trotter's Farm. Then, Thomas realises that Winston is not with him. When Winston suddenly reappears, he tells Thomas that he had been busy looking for something. Thomas is not impressed.

After they have completed their delivery of apples for Farmer Trotter, Thomas speaks to Winston, but Winston does not answer, because he is not there. He arrives moments later and tries to explain what he had been doing, but Thomas is not interested and is very cross with Winston.

Thomas tells Winston to travel in front of him so that he cannot go off again. Then, Winston stops and will not move. He says that he has spotted something that will make the Fat Controller very happy. Winston has found the Fat Controller's special carriage hidden in the trees. When the Fat Controller sees it, he cannot believe his eyes. He calls both Thomas and Winston really useful. 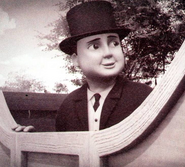 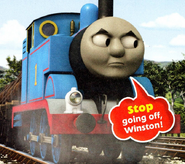