Day of the Diesels (T&F)

Happy Hook is a stationary, non-sentient crane based at the Vicarstown Dieselworks.

When it was Christmas time, Diesel 10 decorated Happy Hook with red ribbons, Christmas lights and mistletoe. He later removed these decorations and gave them back to the Steam Team.

When Diesel wanted to compete in The Great Railway Show, Happy Hook assisted in his plan to be chosen by putting crates on top of Den, Dart and Paxton. It later dropped a crate on Diesel after Dart was bashed into it.

Happy Hook later carried Daisy when Diesel bumped into her so that the engineers and workmen could find out what was wrong with her.

Happy Hook's cab is painted orange, while its tower and crane arm are painted grey.

Happy Hook in the Great Race

Happy Hook lifting Daisy
Add a photo to this gallery 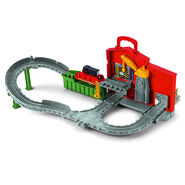 Mega Bloks
Add a photo to this gallery
Non-rail vehicles
* RWS only | ** T&F only | *** Other Media only
Retrieved from "https://ttte.fandom.com/wiki/Happy_Hook?oldid=1714012"
*Disclosure: Some of the links above are affiliate links, meaning, at no additional cost to you, Fandom will earn a commission if you click through and make a purchase. Community content is available under CC-BY-SA unless otherwise noted.