“What are you playing at, Harold? We thought you were going to crash!”
―Gordon

Gordon and Henry are moaning about how noisy things that fly are; first a jet plane, then Harold and now a wasp. Later they see Harold and make as much noise as they can to see how he likes annoying noises. Then, Harold's blades suddenly stop and the helicopter comes plummeting towards the ground as the terrified engines watch. 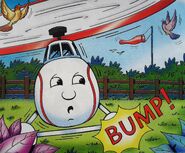 Add a photo to this gallery
Retrieved from "https://ttte.fandom.com/wiki/Harold_Goes_Quiet?oldid=1734994"
*Disclosure: Some of the links above are affiliate links, meaning, at no additional cost to you, Fandom will earn a commission if you click through and make a purchase. Community content is available under CC-BY-SA unless otherwise noted.