Haultraugh is a village and seaside resort located on Sodor's west coast, which is served by the Little Western.

The derivation of this place name is uncertain. "Traugh" means a sandy beach or low-lying foreshore, but "Haul" is obscure. Most authorities agree that it is probably a corruption or simplification of a person’s name, but they are sharply divided as to which. It is most likely that "Haul" or "Hal" is a simplification of "Harold", for there is a strong local tradition that it was here that Harold the Black, son of King Godred MacHarold, landed in 1014 to reclaim his father’s kingdom. Harold ruled Sodor and Man for 20 years (1014-1034). There is certainly a good firm sandy foreshore here favourable for a landing from longships, so Hal’s Beach is a reasonable interpretation of the place's name.

The village is a pleasant summer resort with good clean firm sands. It is rapidly growing in popularity with visitors and holidaymakers. Bathing, however, can be dangerous as tidal currents in the Sudrian Sea are treacherous. To cater to visitors an open-air sea bathing pool has been constructed alongside the harbour jetty. The station is an island platform with a shelter and a line running either side.

Bulgy wedged himself under the second bridge south of the station. After he was freed, he was turned into a henhouse in a field about ½ mile north of Haultraugh station. Dilly the Duck settled here.

In the television series, Haultraugh appeared in the third series episode, Bulgy. The station has a building and a second track on its western side. Bulgy's Bridge and Field are shown as being next to each other, south of the station.

Oliver and Duck at Haultraugh in the Railway Series

The town of Haultraugh behind the station

The same scene from the Railway Series recreated

The station building in CGI 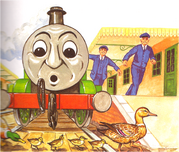 Duck at Haultraugh in an annual story 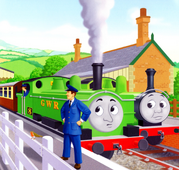 Haultraugh in a Story Library book 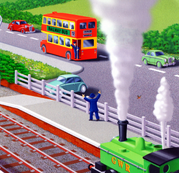 The Little Western
* RWS only | ** T&F only | *** Other Media only
Deutsch Español עברית Polski Русский
*Disclosure: Some of the links above are affiliate links, meaning, at no additional cost to you, Fandom will earn a commission if you click through and make a purchase. Community content is available under CC-BY-SA unless otherwise noted.
Advertisement