“I'd like to operate that old station, if you let me. I promise I won't spook Henry.”
―Old Bailey, Haunted Henry, fifth series

North of Abbey, Island of Sodor

Hawin Lake is a large lake situated on the Peel Godred Branch Line in the television series. A small railway station is located right next to the lake, as well as a nearby forest. Old Bailey is the current stationmaster of the station in thanks after he tried to save Henry and his crew from a landslide that was blocking the line to the Hawin Lake Viaduct. Sir Topham Hatt appointed him as stationmaster.

The station was also redressed with the lake removed and used as the old station seen in Bye George!

The signal and crossing gates

The station before restoration

The station after restoration 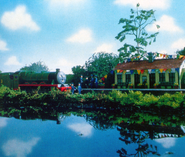 Add a photo to this gallery
North Western Railway
* RWS only | ** T&F only | --- Dropped
Peel Godred Branch Line
* RWS only | ** T&F only
Retrieved from "https://ttte.fandom.com/wiki/Hawin_Lake?oldid=1765351"
*Disclosure: Some of the links above are affiliate links, meaning, at no additional cost to you, Fandom will earn a commission if you click through and make a purchase. Community content is available under CC-BY-SA unless otherwise noted.