“Told him so, Thomas is in trouble now!”
―Henry to Sir Topham Hatt

Hello, Thomas! is a magazine story.

Every afternoon as Thomas chuffs along the branch line to the station with Annie and Clarabel, the children on the bridge greet Thomas as he puffs underneath it, while whistling back to them. At the station, Henry grumbles at Thomas for being late as he pulls in and tells him that the Fat Controller will get a new engine if he does not hurry up. Thomas scoffs at this, but later that night, he starts to worry of what Henry had said.

The following day as Thomas hurries along, he sees a small boy waving to him on the bridge. Thomas thinks he has to make up for lost time, but then he hears the boy needs his help and his crew stops the train. Thomas wonders what is the matter, and the boy explains that the school bus has broken down and their parents will be cross if he and the other children are late home for tea.

Soon as the children climb aboard Annie and Clarabel, Thomas takes them to the next station where Bertie the bus is waiting to take them home safely. When he falls behind the schedule at the station, he can see that the Fat Controller and Henry do not look pleased with his attendance. Then the school bus driver arrives and thanks Thomas for helping the children home. The Fat Controller also praises Thomas for his honourable efforts in helping the children and changes his timetable, so then he will have time to say hello to the children on the bridge and not to be late again. 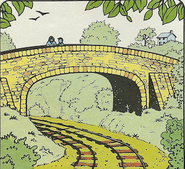 Add a photo to this gallery
Retrieved from "https://ttte.fandom.com/wiki/Hello,_Thomas!_(magazine_story)?oldid=1752972"
*Disclosure: Some of the links above are affiliate links, meaning, at no additional cost to you, Fandom will earn a commission if you click through and make a purchase. Community content is available under CC-BY-SA unless otherwise noted.