“My boiler's grumbling."
"Stop being such a cry baby, Henry. You're fine!”
―Henry and his driver

Helping Henry is a short magazine story puzzle. When republished in 2007, the text was altered slightly.

Henry is not feeling well, but his driver thinks he is fine and tells him to stop moaning. Emily, however, can see that Henry is leaking water. So she reports the problem to the Fat Controller, who thinks there might be something wrong with Henry's pipes. Emily agrees to investigate the problem.

Meanwhile, Henry is still complaining about feeling stiff whilst pulling some coal trucks. Suddenly, Henry grinds to a complete halt. Just then, Emily arrives and sees her friend broken down. She immediately couples up to Henry and takes him to the works. She insists that Henry will soon feel better and it is not long before he does. 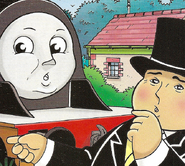 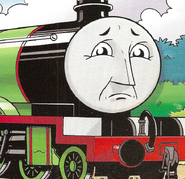 Add a photo to this gallery
Retrieved from "https://ttte.fandom.com/wiki/Helping_Henry?oldid=1694375"
*Disclosure: Some of the links above are affiliate links, meaning, at no additional cost to you, Fandom will earn a commission if you click through and make a purchase. Community content is available under CC-BY-SA unless otherwise noted.