Henrietta is a coach that travels with Toby, Victoria and Elsie. Percy or Daisy usually take her when Toby is absent. Thomas and Emily have also pulled her.

Henrietta worked with Toby on their old tramway in East Anglia. She became depressed when buses and lorries took over her work and when their line closed, due to the lack of passengers and freight, Toby could not bear to leave her behind. So Toby brought her with him to the North Western Railway. He mentioned to the Fat Controller that a stationmaster on his tramway wanted to use her as a henhouse, but the Fat Controller agreed that "that would never do".

At first, Toby and Henrietta were teased by James for having shabby paint. However, Toby and Henrietta later received new coats of paint for their hard work and James stopped teasing them after he crashed into some tar wagons and spoiled his own paint. When the engines went to England, she was used as the Fat Controller's "private coach". Later, when Daisy was brought to Sodor, she insulted her along with Annie and Clarabel when Daisy found that she had to share the Carriage Shed with them and Percy and Toby were forced to take them away and stay up half the night trying to cheer them up.

Henrietta is often used to carry quarry workers to and from Anopha Quarry. Once, some workers had to crowd on Henrietta's balcony. However this caused controversy with a policeman, who sent an inspector to inform the quarry manager of a by-law forbidding passengers to be carried on coaches' balconies. This problem was resolved when the Fat Controller restored an old coach named Victoria to help Toby and Henrietta. Together they formed "Toby's Vintage Train".

One Christmas/Thanksgiving, the villagers from Ulfstead loaded her up with paint pots and presents to give to the engines as a token of gratitude for their hard work in the snow. During a snowstorm, Henrietta allowed Farmer McColl's sheep and newly-born lambs to warm up inside her cabin until the snow thawed. Sometime afterwards, Toby and Henrietta attended the Great Waterton tram parade, alongside Flora and her tram coach.

In the eighteenth series, Henrietta helped Toby get over his fear of Knapford junction. Thomas was sent to pull her (unseen) when Samson accidentally took the express coaches by mistake, because Gordon had to take Thomas' coaches, Annie and Clarabel.

In the nineteenth series, she advised Toby to go to the Steamworks to fix his wobbly sideplates and also told him to fill up with coal on his way to the scrapyard, which he did not. She later heard Paxton talking to Emily about Toby being scrapped and knew that it was nonsense. Emily took Henrietta to the scrapyard where they found Toby safe, but out of coal.

In the twenty-first series, after Toby took her to the Steamworks to get her seats refurbished, Toby was given a replacement carriage named Hannah. After she had her new seats fitted, Toby took Hannah to the Steamworks to be mended, where Henrietta reunited with Hannah and revealed to Toby that they were sisters. Afterwards, she began working with Toby once again.

Henrietta is Toby's faithful coach, who likes to be full of passengers and take them on journeys. She does not like to be separated from Toby, although she rarely carries a full load of passengers. Henrietta is quite content with her life on the Island. Toby is attached to Henrietta and always takes her with him, as he says "she might be useful one day".

From the eighteenth series onwards, Henrietta is seen motivating and encouraging Toby when he feels nervous about the capabilities of his work and performance. She also encourages others and gives them good advice.

Henrietta is based on the GER Wisbech and Upwell Tramway 4-wheel coach. From the beginning, the Wisbech & Upwell used its own special passenger stock. Initially, only four wheelers were used, but bogie coaches were introduced in 1884. The coaches had balconies at each end and a drawbridge type gangway between coaches. Each balcony had an emergency hand-brake wheel. The coaches looked squat and low-lying due to the need to handle raised track and the absence of platforms at some of the depots. All the four-wheeled coaches were scrapped by 1948, but the bogie coaches survived into British Railways ownership. One of them, Irene, No.7, has been preserved by the Midland & Great Northern Joint Railway Society. 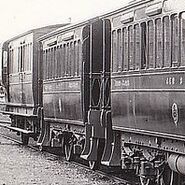 The bogie coach
Add a photo to this gallery

In the television series, Henrietta is painted brown-orange with red bufferbeams and a grey roof.

“It's not fair at all!" grumbled Henrietta as the buses roared past full of passengers. She remembers that she used to be full and nine trucks would rattle behind her. Now there are only three or four, for the farms and factories send their goods mostly by lorry.”
―Henrietta, Toby and the Stout Gentleman, Toby the Tram Engine

“Toby had wanted to take Henrietta, but the Fat Controller had said, "No!" He wondered if Henrietta was lonely. Percy had promised to look after her; but Toby couldn't help worrying. "Percy doesn't understand her like I do", he said.”
―Toby and the Fat Controller, Double Header, The Eight Famous Engines

North Western Railway
* RWS only | ** T&F only | --- Dropped
Ffarquhar Branch Line
* RWS only | ** T&F only
Toby's Branch Line
Retrieved from "https://ttte.fandom.com/wiki/Henrietta?oldid=1786528"
*Disclosure: Some of the links above are affiliate links, meaning, at no additional cost to you, Fandom will earn a commission if you click through and make a purchase. Community content is available under CC-BY-SA unless otherwise noted.