Passengers (2000)
Henrietta's Holiday is a magazine story. It was originally published in the 2000. A slightly altered version is later published in 2013 and 2015.

The next day, Henrietta is coupled to Gordon's express train. Gordon thunders along and Henrietta, not used to travelling so fast, does not like it.

A few days later, Henrietta is pleased to hear that she will be working with Thomas. Lots of passengers rush to board her first. Clarabel is not happy; Henrietta seems to be more popular than her.

Later on, the Fat Controller ponders who Henrietta can work with next and decides that Gordon, Henry and James are too fast for her. So, he sends her to work with Duck.

Early the next day, Duck comes along to pick up Henrietta and tells her that the busy trains are the first and last ones so he intends to leave her at Tidmouth during the day. So, Henrietta has a lovely day waiting by the seaside. She cannot wait to tell the workmen about her holiday. 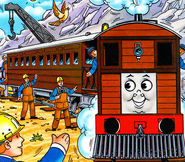 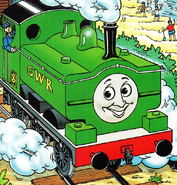 This illustration is taken from the original magazine's cover and is not part of the original story.
Add a photo to this gallery
Retrieved from "https://ttte.fandom.com/wiki/Henrietta%27s_Holiday?oldid=1694381"
*Disclosure: Some of the links above are affiliate links, meaning, at no additional cost to you, Fandom will earn a commission if you click through and make a purchase. Community content is available under CC-BY-SA unless otherwise noted.