Henry's Good Deeds is a magazine story, illustrated using photographs from the CGI television series. It was later published in the 2012 Thomas Annual

One day, the Fat Controller tells the engines that a rare bird called the Sodor Warbler has returned to the island. Henry is given the job of collecting a nesting pole for the bird. On his way, Henry sees Thomas who has stopped to let Farmer McColl cross the line with his herd of sheep. Later, Henry sees some pigs by the side of the line. He stops and lets the pig cross the tracks so that they can wallow in the mud. Farmer Trotter is very cross because his pigs are dirty and Henry is upset, as his good deed backfired.

Thomas soon arrives, taking passengers to see the Warbler, but the pigs are blocking the line. As another good deed, Henry takes the passengers to find the warbler. But, when they do find the rare bird, Henry is too loud and the bird flies away. Henry feels awful and he still has to deliver the nesting pole. On the way, the Warbler perches on Henry's buffer. Henry puffs very slowly to the station and all the bird watchers cheer for him! 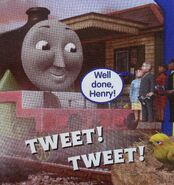 Add a photo to this gallery
Retrieved from "https://ttte.fandom.com/wiki/Henry%27s_Good_Deeds_(magazine_story)?oldid=1759220"
*Disclosure: Some of the links above are affiliate links, meaning, at no additional cost to you, Fandom will earn a commission if you click through and make a purchase. Community content is available under CC-BY-SA unless otherwise noted.