“Eww! What a horrible pong!”
―Gordon

Henry's Hero is a magazine story, it was illustrated by using images from the CGI television series.

Henry and Hiro fill up with coal before heading to the docks. As they travel across the island, they both start to puff out black smoke. Duck rolls past and tells them that they have taken on bad coal and he is off to get some fresh coal. Henry wants to wait for the fresh coal, but Hiro insists that they carry on. Henry is too afraid to carry on and heads back to the sheds.

Now, Hiro is left with all the trucks. He is determined to get the job done. Gordon passes by and gets black smoke blown in his face, which he does not like at all. Hiro struggles on, but soon realises there are too many trucks for him to haul alone and leaves half of them behind.

As Hiro reaches the docks, a strange noise starts coming from his firebox. Thomas is concerned, but Hiro hurries away to collect more trucks. When Hiro pulls back into the docks with the other half of his train, the Fat Controller has another job for him. He tells Hiro that he and Henry must go to the Smelter's Yard to collect some heavy iron girders.

Hiro goes back to Tidmouth Sheds to find Henry who is impressed that Hiro managed to deliver all the trucks by himself. Together, the pair set off to collect the iron girders with Henry pushing and Hiro pulling. Suddenly, Henry's firebox starts making weird clunking noises too and then, Hiro grinds to a complete halt; his firebox is blocked. Hiro admits that he should have listened to Henry, but the green engine is determined; Hiro has taught him to keep on puffing and that's what he intends to do. Henry puffs hard and gets Hiro and the heavy flatbeds up the hill and all the way to Brendam Docks.

Once at the docks, the Fat Controller praises both engines before they both head off to the Sodor Steamworks to be repaired. 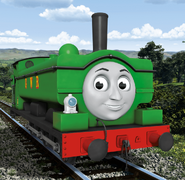 Add a photo to this gallery
Retrieved from "https://ttte.fandom.com/wiki/Henry%27s_Hero_(2015_magazine_story)?oldid=1694879"
Community content is available under CC-BY-SA unless otherwise noted.