Travelling Up and Down

Henry's Hills is a magazine story.

Henry thinks that he is the only engine that always goes uphill. He tells this to Edward, who tells him that he must come down a hill if he goes up one and that he does not take any notice of going downhill because all he concentrates on is grumbling about going uphill. Edward goes on to tell Henry that he should take more notice of the good parts of his day instead of grumbling about the bad parts. Henry agrees and takes Edward's advice. 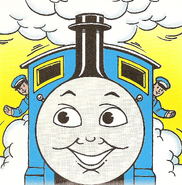 Add a photo to this gallery
Retrieved from "https://ttte.fandom.com/wiki/Henry%27s_Hills?oldid=434200"
*Disclosure: Some of the links above are affiliate links, meaning, at no additional cost to you, Fandom will earn a commission if you click through and make a purchase. Community content is available under CC-BY-SA unless otherwise noted.