Henry is a fictional standard gauge tender locomotive created by the Rev. W. Awdry. He is the No. 3 engine on the North Western Railway.

He first appeared in the Railway Series book, The Three Railway Engines, which was published in 1945. His last appearance was in Thomas and his Friends, published in 2011.

The rear of Henry:

In the Railway Mischief DVD, the Mr. Perkins segment features a re-illustrated version of the story Thomas' Train where Henry is depicted in his television series livery.

The Reverend W. Awdry had a great deal of trouble with Henry. Originally, Awdry had illustrated him as a 4-4-2 Atlantic, however, William Middleton changed this when he illustrated him as a 4-6-2 Pacific similar to Gordon. Awdry was especially unhappy with C. Reginald Dalby's illustrations: he looked almost identical to Gordon, more so while he was painted blue - in Tank Engine Thomas Again, Henry looked completely identical to Gordon, but this was passed off by explaining he needed to use Gordon's buffers while he were being repaired. To make matters worse, he was illustrated inconsistently, often having several different shapes within the space of a single story - in most of Dalby's illustrations, Henry was portrayed incorrectly as a 4-6-0 instead of a 4-6-2.

Awdry's original idea had been to write Henry out of the series, but by "Henry the Green Engine" he had decided to instead have Henry involved in a serious accident, allowing him to be rebuilt into a Class 5MT. As this was a real locomotive, Dalby was thus forced to be consistent. Since then, Awdry would base all his locomotive characters on real-life prototypes and for such characters as Edward, Gordon, James and Percy, he would invent backstories for them.

According to The Island of Sodor: Its People, History and Railways (TIOS), Henry was an experimental locomotive built from plans stolen from Sir Nigel Gresley, but the wrong plans were taken and the locomotive built was so riddled with faults that the only person who could be persuaded to buy it was the Fat Controller, who, at the time, was desperate for any locomotive he could get.

There is a certain amount of argument over Henry's rebuild, caused by "TIOS", which was written to provide historical background to the Railway Series and to correct pictorial inconsistencies that had occurred in earlier volumes. The Reverend W. Awdry claimed that the pre-rebuild and post-rebuild Henry were actually two completely separate engines, although in the Railway Series, Henry seemed familiar with events that happened before the crash. Henry's memory could have simply survived the rebuild, but as both sources can be considered equally canonical, the question of whether there have been two Henrys or one will likely remain unanswered.

"TIOS" also featured a biography of the Fat Controller, which mentioned that he was apprenticed with Stanier at Swindon Works. It is possible that this was another piece of retcon added to explain how Henry was able to be rebuilt so easily - something that even the Reverend W. Awdry admitted was "a mystery".

In Sodor: Reading Between the Lines Henry was said to look very much like a Stanier 5MT, which suggests that he is not totally identical to one of these engines. It is not clear why Christopher Awdry should have felt the need to contradict his father, but it could simply be a combination of errors and publication deadlines.

Henry was introduced in the television series in 1984 when the first series premiered and has appeared in every series since.

Many of the early episodes focusing on Henry feature him reprising his roles from the Railway Series. Unlike the Railway Series, Henry was never painted blue following the events of Edward, Gordon and Henry. This was done due to production costs and so that viewers would not mistake him for Gordon, as this was a notable issue in the book Tank Engine Thomas Again.

In the eighth series, Henry was among the members of the Steam Team, the main cast of eight central characters. However, starting with the twenty-second series, Henry (along with Edward and Toby) was removed from the Steam Team in favour of Rebecca to join in order to fix the gender imbalance at Tidmouth Sheds and diversify the Thomas and Friends franchise. He now appears as a major supporting character, however, he has not had any major roles so far since his removal from the Steam Team.

Kevin Frank voiced the character in Thomas and the Magic Railroad, giving the character a faint but noticeable British accent. Keith Wickham assumed the character's role in the UK and Kerry Shale in the US (Martin Sherman originally auditioned for Henry). While Wickham maintains Henry with a British accent, Kerry Shale's performance is clearly American, though earlier post-Hero of the Rails episodes had his voice at a lower pitch than usual, before his voice became higher in following productions.

Henry's original model was built with a custom made perspex bodyshell and used a Märklin locomotive as a donor for the chassis and various parts. It was painted using car body paint and lined with red automotive pinstripe tape with his numbers being custom cut vinyl stickers.

Henry's main chassis was sourced from a gauge 1 locomotive made by Märklin, the BR 78, while the tender wheels were from the tender of the BR 55. The bufferbeams and dome were also from the BR 78 as well as the handrail stanchions, tender steps, cab controls and tender details. One of which was used from Gordon's BR 78 donor bodyshell as he lacked this same tender detail so did not need it.

His model was built with the ability to be changed to his "old" shape or "new" shape when needed due to the series being filmed out of sequence. His "old" shape features splashers, a tapered firebox and no top feed or exterior steam pipes, while his new shape did have the top feed and exterior steam pipes as well as a Belpaire firebox, but no splashers as they were not permanently fixed on to accomodate for this change in appearance when filming.

Henry’s perspex model was originally AC powered as this is how the Märklin locomotives were powered. This required the polarity switch which was originally mounted in front of the main motor to be moved to the tender, allowing space for the smoke mechanism which sat in between the motor and eye mechanism. During a refurbishment, his AC motor was replaced by a DC motor to allow for easier running and maintenance. 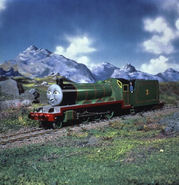 During the production of the tenth series, two new models of Henry were built. This was due to the original model being 22 years old at this point and the tight filming schedules meant there was very little room for emergency repairs.[1]

The new models were made out of brass and equipped with a CNC machined aluminium chassis powered by a DC motor. From this point onwards the perspex model would only appear in scenes that would damage the brass models.[1] One exception exists in Big Strong Henry where a brass model was used for the crash instead of the perspex model. This may be due to the perspex model having a previously loose middle left drive wheel which is visible in promotional photographs and some scenes of the episode Henry and the Wishing Tree. The way this crash unfolded could have caused the old repair to fail.

Eighteen different facial expressions were sculpted for Henry, although only seventeen were used on-screen. Henry had two variants of his surprised face with the later one being made from the same sculpt as the "ah" sneezing face. The last face was only seen when one of Henry's brass models was on display at the British Museum for the 70th anniversary, it appears to be an "exhausted" expression. The faces were first sculpted in clay, then a silicone mould was made of this sculpt which was then cast and smoothed for moulding and casting again to produce the final face which was then painted. Some of Henry's faces were duplicated in case the crew needed a face to look dirty and clean on the same day of shooting. One of Henry's faces is now owned by Twitter user ThomasTankMerch.

...until its eyebrows were modified to resemble a determined face during the Gullane Entertainment... (2002, 2003)

...later had its eye socket size reduced in the sixth series all the way until The Great Discovery (2002-2008)

...later had its eye socket size reduced in Thomas and the Magic Railroad all the way until the eleventh series (2000-2007)

Henry's "ah" or stuffed up face mask that originally appeared in both the first series episodes, The Flying Kipper... (1984)

...and did not appear again until the tenth series episode, It's Good to be Gordon (2006)

...and reappeared in the eighth series episode, Henry and the Wishing Tree (2004)

...later reappeared in Thomas and the Magic Railroad and had its eye socket size reduced all the way... (2000)

...until its eyebrows were modified between the sixth and eleventh series to resemble a depressed face (2002-2007)

...it was reverted back to its original laughing face from the sixth series all the way until the eleventh series (2002-2007)

Henry's sleepy face that only appeared in the two fourth series episodes, Sleeping Beauty and Bulldog (1994)

Henry's unused second series surprised/spooked face mask that only appeared between the fourth and sixth series... (1986, 1995-2002)

...and reappeared in the tenth series but the mask has been recasted that appeared between said series and The Great Discovery (2006-2008)

Henry's spitting face mask that first appeared in the fifth series episode, Something in the Air... (1998)

Henry's sleeping face mask that only appeared between Thomas and the Magic Railroad, Calling All Engines!, and the ninth series (2000-2005)

Henry's second wincing face mask that only appeared in the tenth series episode, It's Good to be Gordon (2006)

Henry wearing his unused fourth series exhausted face mask that was never used in the model era, but was put on display at the British Museum for the 70th anniversary (1994, 2015)

Henry’s face masks during production of the fourth series (1995)

Series 12 marked the beginning of the show's transition to CGI and the characters' faces were animated through CGI with the aid of motion-capture animation. The physical models moulded faces were replaced by white targets with triangles to fix a computer-animated face in post-production. Henry’s resin faces were only used in background shots.

Henry’s gauge 1 models had gone through several aesthetic changes in the television series:

Henry's tender does not have a coal load in the episodes Thomas' Train and Oliver's Find. The first being a photo taken during a scene setup (note James also has no coal load) while the other is a deleted scene.

Henry has been seen mistakenly given Gordon's facemasks in the episodes, Peter Sam and the Refreshment Lady, Thomas and the Billboard and Heave Ho Thomas!.

Henry at the Tidmouth Sheds Exhibit at Drayton Manor

Henry At The British Museum

Note: Blu-tak on left arm and Gordon's tender is covered with green vinyl

In 2009, the television series introduced Computer-Generated Imagery (CGI) as a replacement for the show's long-standing live-action models. Henry was recreated from scratch in CGI by Nitrogen Studios. His CGI model was identical to his Gauge 1 model but has had slight modifications:

The following pantone colours are used on Henry's CGI model:

Retrieved from "https://ttte.fandom.com/wiki/Henry/Behind_the_Scenes?oldid=1736250"
*Disclosure: Some of the links above are affiliate links, meaning, at no additional cost to you, Fandom will earn a commission if you click through and make a purchase. Community content is available under CC-BY-SA unless otherwise noted.