“Whistle, Henry! It's the rule on this line"
"A big engine like me? I'm not whistling!”
―The driver and Henry

Henry is a short magazine story.

Henry refuses to blow his whistle when instructed to by a railway sign that says "Whistle". As a result, he meets Edward going round a sharp bend in the track. From then on, Henry always obeys the rules. 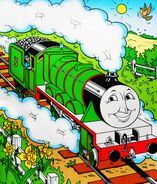 Add a photo to this gallery
Retrieved from "https://ttte.fandom.com/wiki/Henry_(1998_magazine_story)?oldid=1694530"
*Disclosure: Some of the links above are affiliate links, meaning, at no additional cost to you, Fandom will earn a commission if you click through and make a purchase. Community content is available under CC-BY-SA unless otherwise noted.