Henry and the Tunnel

Henry and the Tunnel is a My First Thomas-style book.

Henry is shut in a tunnel for being naughty since he did not want the rain to spoil his paint and is eager to get out. He is given the chance when Gordon breaks down while pulling the Express and the train is too heavy for Edward to move alone. Sir Topham Hatt lets Henry out of the tunnel so that he and Edward can pull the train together. As a reward for his hard work, Henry gets a new coat of paint.

Henry hiding inside the tunnel

Edward struggling to pull the train 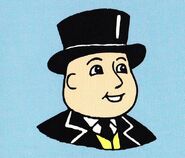 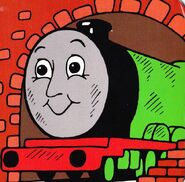 Henry after being freed from the tunnel

Henry and Edward in a double header

Add a photo to this gallery
Retrieved from "https://ttte.fandom.com/wiki/Henry_and_the_Tunnel?oldid=1691878"
*Disclosure: Some of the links above are affiliate links, meaning, at no additional cost to you, Fandom will earn a commission if you click through and make a purchase. Community content is available under CC-BY-SA unless otherwise noted.