Henry the Green Engine Gets Out

Henry The Green Engine
Gets Out

Heinemann Young Books
Henry the Green Engine Gets Out is a pop-up book written by the Reverend W. Awdry and illustrated by Clive Spong.

Henry refuses to leave the tunnel for the fear that will rain spoil his paint, so he gets bricked up and Edward and Gordon use the new tunnel instead. However, when Gordon bursts his safety valve and the express is too heavy for Edward, Henry is allowed out of the tunnel and he helps Edward with the express. 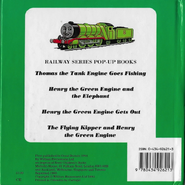 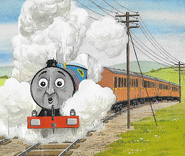