Henry the Green Engine
and the Elephant

Henry the Green Engine and the Elephant is a pop-up book written by the Reverend W. Awdry and illustrated by Clive Spong.

After James takes the circus train away, Henry has to take some trucks to clear a tunnel. But the blockage turns out to be an elephant from the circus, who gives Henry an unexpected shower. 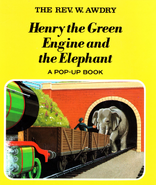 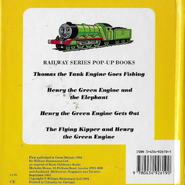 Henry and the Troublesome Trucks 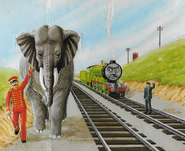 Add a photo to this gallery
Retrieved from "https://ttte.fandom.com/wiki/Henry_the_Green_Engine_and_the_Elephant?oldid=1717471"
*Disclosure: Some of the links above are affiliate links, meaning, at no additional cost to you, Fandom will earn a commission if you click through and make a purchase. Community content is available under CC-BY-SA unless otherwise noted.