“Slowcoach! You'll be here all day!”
―Lorry 1 and Lorry 2 to Thomas

Lorry 1 and Lorry 2 love racing along as fast as they can. Thomas rises to their teasing and tells them that they are only so fast because they do not have to haul heavy trucks like he does. Thomas and the lorries approach Gordon's Hill. Thomas has to puff so hard that he cannot even whistle while Lorry 1 and 2 speed past him on the road.

When Thomas reaches the top of the hill, he decides to show the taunting lorries just how fast he is. Thomas races down the other side of the hill, passing the lorries. His trucks bounce and their goods are sent flying into the air. The crates of cabbages and tea drop down onto the road and block the horrid lorries' path. Lorry 1 and Lorry 2 admit defeat, just feeling lucky they were able to stop in time to avoid a nasty accident. 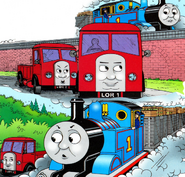 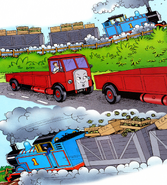 Add a photo to this gallery
Retrieved from "https://ttte.fandom.com/wiki/Hill_Spill!?oldid=1970791"
*Disclosure: Some of the links above are affiliate links, meaning, at no additional cost to you, Fandom will earn a commission if you click through and make a purchase. Community content is available under CC-BY-SA unless otherwise noted.